Why does CTNTP have a vision for a gathering in the centre of England on 29th September 2018, to prophetically release revival? Here is more of our journey, with a recent and exciting update!

November 2017, Peter Hill arrived in the UK from Canada on his third visit to explore what The Lord had for CTNTP. Peter met with David Gilbey and just a few hours after touch-down, over dinner, Peter spoke of his vision for the joining of two shepherd’s crooks.

One of facets of this vision, was that it was to happen in the centre of the Nation.

Peter mentioned that he believed Coventry to be about the centre of England, which

made David’s ears ‘prick-up’! Just a couple of weeks before David had been on a train from London to Birmingham and had been prompted to take just one photograph… through his carriage window, that of a Coventry station sign!

David and Peter were planning to travel around England the following week to visit some far-flung contacts, but at the point Peter arrived, they had nowhere planned for the Tuesday and Wednesday. Later that evening, David felt God was telling them to go to Coventry. David felt that if necessary he and Peter would simply walk the streets and see what The Lord might say to them!

In his ‘former life’, David was a police constable, and looking for ‘evidence’ and ‘clues’ as to what The Lord might want to do, was a natural part of his thinking.

There is more that could be told, but David then discovered that, just to the west of Coventry, there is a village called Meriden and on its village green stands a five-hundred-year-old Market Cross. This location is widely regarded as the traditional centre of England and a plaque at the base of the market cross attests to this fact.

So, on Tuesday 7th November 2017, Peter and David went to Meriden, stood at the market cross to see what ‘clues’ The Lord reveal to them.

As he approached the column, David spotted a

large brightly hand-painted stone laying in plain sight on the grass in front, seemingly waiting for him to find! It depicted blue sky, the sun shining, birds flying and flowers in bloom. (It was discovered in the local cafe, that this was a project by local children who would leave there stones, usually hidden, around the district for people to find). What was remarkable is that the stone was perfectly rounded, like an egg – David felt it symbolised new-life – something about to hatch, to breakforth!

Not only because of finding the ‘egg’, but David and Peter came away from Meriden that morning, strongly believing that God had led us to the place He had chosen for the prophetic act. They went on to Coventry itself, where they met certain people (and that’s another story!) and that belief increased.

Subsequently, a CTNTP Steering Team was formed – with representation in Coventry – and a process of engaging with certain local Christian leaders has been taking place – we knew we could not just turn-up in a City where we were not known and proclaim that we were going to hold a slightly unusual prophetic gathering, without explanation and first building relationships!

Leading up to Easter, March 2018, relationships were such that we felt we could now release more details of our proposals to HOPE Coventry, the ecumenical group, connecting many of the City’s churches.

A couple of days later, we unexpectedly received an email from a couple who had been told of our website, John and Pam Yates, who live on the Isle of Wight.

We were amazed to hear that in 1979, John Yates received a vision from God about the centre of England.

‘In the autumn of 1979 John had been alone praying, when the presence of God became very powerful in his room. God began to show John the importance of establishing His Kingdom presence in the heart of England, which would then ripple outwards nationally and internationally. This vision was so powerfully implanted within John that he pursued it wholeheartedly from that time on, whatever the cost.’

In 1990, John realised that the work he had been pursuing, called Heart of England Outreach, was to be centred in no less than Meriden.

When in 2010, John and Pam subsequently moved to the Isle of Wight, an amazing work, which included the establishing of a church in Meriden, a centre for prayer and ministry, prayer walking in the area, gatherings at the market cross and much more, was handed over to others. But in the last few years, it has ceased.

John Yates has published a fascinating book of his story, The Journey – click here to read it.

Picking up the ‘baton’ 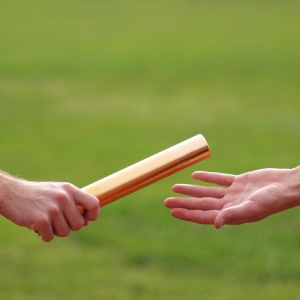 Having spoken with John and Pam Yates. we believe CTNTP may well have again picked up the ‘baton’, that of the vision The Lord originally gave to John in 1979 and which John and Pam established; to see ‘His Kingdom presence in the heart of England’.

Dare we also believe that the gathering and prophetic act we propose on 29th September, the joining of two shepherds crooks representing, the Spirit and the Word, will initiate that Kingdom presence. ‘which would then ripple outwards nationally and internationally.’?

Certainly that is what Peter Hill and David Gilbey felt when they first stood in Meriden last November and The Lord seems to have provided another very strong clue!

The actual ‘cross’ from the top of the column of the Market Cross in Meriden has long since disappeared. Instead a rod protrudes, rather like a lightning conductor? John Yate’s description of a ‘ripple’ going out from the centre of the UK,  reminds us of Jean Darnell’s prophetic vision – a description of lightning striking the UK, releasing ‘rivers of fire’ to flow across nation! Revival!

We are now starting to pursue the practicalities and details of how the gathering on Saturday 29th September will actually happen. Much is still unknown and we know time is relatively short. But we continue to sense God’s hand in the timing of it all.

Please pray that as we take further steps of faith and engage with others in the Coventry area, that we will see all the evidence of The Lord’s preparation fall into place.

One thought on “Finding clues at Meriden”