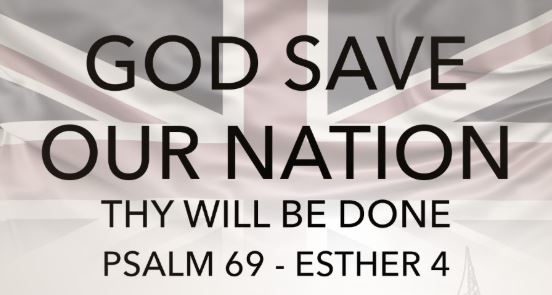 CTNTP recently received an email, via our friends at Christians Together in Chelmsford, for a nationwide call to prayer and fasting for three days, Monday 28th to Wednesday 30th October 2019. We understand this has also been widely circulated to other prayer and Christian unity groups around the nation.

We contacted its originator, a lady by the name of Denise, who told us:

The Lord spoke to me through Psalm 69 and told me that we are in the mire as a nation and as a people. During an intercessors prayer meeting I clearly heard the words GOD SAVE OUR NATION.  Then He led me to Esther 4 and I knew this was a nationwide call to the church to fast and pray at this hour.  I woke up one morning early and heard the words CLARION CALL. I am doing this in obedience to the Lord. Not something I have ever done before and it has not been without its challenges.

Denise added that she was doing this with the knowledge and help of her pastor. She has requested that the call be passed on to Churches, Christian organisations and Prayer Networks, as well as individual Christians.

it is great to hear of so many calls to prayer for the UK at this time, but as usual CTNTP advocates the careful weighing of anything said to come from The Lord. Respond to this call to prayer as you feel The Holy Spirit lead.

GOD IS WEEPING OVER THE SINS OF OUR NATION AND ITS PEOPLE. Parliament is in utter chaos.  Governments are crumbling.  Confusion, mischief, mayhem, and anarchy are the order of the day.  God is the answer. It’s time for the CHURCH OF JESUS CHRIST to RISE UP. The CALL is for churches to be in unity with other churches and individuals across the United Kingdom to FAST and PRAY; to weep in sackcloth and ashes for the state of our Nation and stand in the gap.

IF MY PEOPLE WHICH ARE CALLED BY MY NAME, SHALL HUMBLE THEMSELVES AND PRAY, AND SEEK MY FACE AND TURN FROM THEIR WICKED WAYS; THEN WILL I HEAR FROM HEAVEN, AND WILL FORGIVE THEIR SIN, AND WILL HEAL THEIR LAND.  2 Chronicles 7 v 14

FOR THE GLORY OF GOD TO BE REVEALED