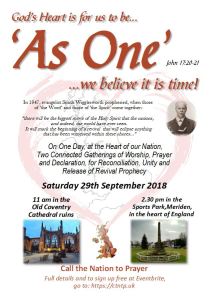 It is less than four weeks to go until our ‘As One’ gatherings in the Heart of the Nation.

Do let us know if you can come, by signing up  – click here.

Ripples! They keep coming to us! We have long seen that ‘As One’ will create have an effect way beyond the events on the day.

We wrote about it last on 14th August – click here for the full Blog Post, but one part reads:

From the beginning, we have envisaged an ‘impact’, with a ‘ripple’ pulsing out, from the very centre of the UK, across our Land and beyond. We are creating an opportunity for that to happen – we are reminded as to what happened on the day of Pentecost, when a small number of committed followers of Jesus gathered in prayer and cried out to Heaven, having no idea of the impact that was to shortly result as The Holy Spirit fell.

CONFIRMATION! A Staff and a Ripple!

We love it when God sends confirmations – and there have been many on our journey – the latest received yesterday, 2nd September from a lady who we did not know, but who has previously been involved in prayer for our nation.

…I was told about the call to pray by a lady whose story linking her to this same call was amazing and clearly God led.  What I didn’t tell her was that as she spoke I had an instant vision which I cannot profess to fully understand but which feels in some way significant:

I saw myself standing in the middle of a field with what looked like a long staff of some kind in my hand.  I raised it and thrust it downwards as though I were planting it in the ground.  There was a great sound or vibration (very difficult to describe) and I saw ripples go out from the spot.

At the time, this friend was talking about Meriden, to which she has an uncanny connection, and I had never heard about the centre of England…’

And that’s exactly what we had already seen! 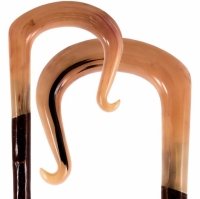 On the 29th September, in a field, in Meriden, we will be joining two Shepherds Crooks – staffs – to represent the Spirit and the Word coming together (read more – click here) and already we see this as a ‘ground zero’ moment – a ripple for ‘revival’ fanning out to the entire UK and beyond.

You really do need to be there!

One thought on “A Vision – thrusting down a staff – causing a ripple!”