Trumpet Call to the UK

Large banners were paraded with the Moravian Church emblem, proclaiming ‘Our Lamb has conquered – Let us follow Him’!

The compelling theme of the day was about ‘turning from’ and ‘turning to’. It is time for the UK to repent, and turn to Jesus.

Last Saturday, one week before our ‘As One’ event, which is on Saturday 29th September – details here – some of our Team, went for a walk along the prom. at the estuary town of Maldon, Essex.

At the very end, there is a statue of Earl Byrhtnoth, who fought invading Vikings, at the Battle of Maldon, in 991.

Around the bottom of of the statue’s plinth, is part of Byrhtnoth’s final prayer, ‘Grant me O Lord Thy grace’.

Standing resolutely against an ungodly, pagan invasion of our Land, there Byrhtnoth died, defending our Nation.

After the battle Archbishop Sigeric of Canterbury and the aldermen of the south-western provinces advised King Æthelred to buy off the Vikings rather than continue the armed struggle. The result was a payment of 3,300 kg of silver.

A confirmation and a Battle Cry! 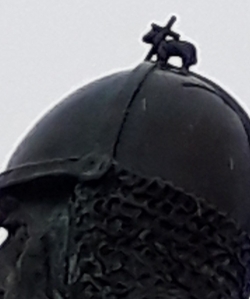 The spot upon which the statue stands has something  about it – a place which prayer seems easy and compelling!

As our Team earnestly prayed, seeking God for national revival, we noticed something on the top of Byrhtnoth’s helmet… a Lamb and a Cross! – the very same symbolism as adopted by the Moravians, several centuries later!

We felt The Holy Spirit’s stirring.

For too long, the ‘enemy’ has inhabited our Land, plundered our nation and held us captive! We have capitulated far too many times.

It is time, time for Believers in Jesus to arise and turn.

One thought on “Our Lamb has conquered – Let us follow Him”

One of our Partners: Passion for the Nation