Skip to content
Peter Hill believes that Regional ‘Hubs’ may well be part of God’s plan to help facilitate Call the Nation to Prayer.
.
When he was in England in April 2016, during a time of prayer, a lady called Clare saw a number of pylons carrying cable across the Nation which seemed to relate to leaders/Intercessors, centres and communications.
.
(Read more of Peter’s April visit here).
.
Earlier this year, before I had met, or even heard of Peter Hill, I was praying with a friend who runs a prayer organisation in the London area. My friend saw a small spider hanging from a thread of silk and as we prayed, in essence we felt God was talking to us about the threads of individual prayer groups, churches and organisations, becoming joined together into a strong and connected ‘web’.

Since meeting Peter and spending time talking and praying about CTNTP, this idea has again surfaced, but in the context of  regional ‘Hubs’, situated at key points in the Nation.

Over the last couple of years, I have seen that the larger prayer organisations around the UK are increasingly partnering and seeking to stand together However, I also believe that the many smaller groups that exist often do not know of each other, even if in adjacent localities. I see a need to create and build relationships and unity between them all – large and small.

I don’t see unity being about everyone praying for or doing exactly the same things; on the contrary, from my experience in running Chelmsford 24-7 Prayer, I can clearly see that locally based prayer needs to ‘look like’ the area which it serves. There is history and dynamics both physical and spiritual in any region, city, town or village that must always be considered by those situated in, or called to serve in them. ‘One size fits all’ does not do the job! At the same time larger prayer movements can be great providers of encouragement, resources and information, also setting up initiatives in support and to catalyse what is happening locally. 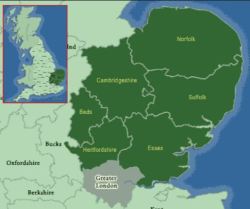 In August 2016, I was led to go to David’s Tent, 72 hours of worship at a location in West Sussex. There in a marquee devoted to prayer, I saw hanging a large map of the UK, and God spoke to me about ‘connecting’ East Anglia – initially at least in Essex, Suffolk & Norfolk. Subsequently I’ve considered this might include Cambridgeshire, Hertfordshire and Bedfordshire too?

In the context of Hubs’ I am feeling that the time is right, to start to draw together the ‘threads of prayer’ taking place throughout my region.

I am therefore presently engaged in some tentative steps to identify and form relationships with those  who are already praying for their communities and our Nation in East Anglia .

I endevour to provide updates as things develop.

Blessings to you all

If you are in any way involved in prayer within the East Anglia Region, please contact David Gilbey.