Have you thought about making prayer a ‘visible presence’ in your community?

Our partner organisation, Chelmsford 24-7 Prayer, has done just that and when they prayer walk their streets, they wear blue reflective jackets, which proclaim, ‘Praying For Our City’.

They feel it is important to be seen in the City  – and their presence often attracts positive comments and conversations.

In early January 2017, they passed a man, who asked them what they were doing. A conversation of only a minute or two resulted and they walked on. 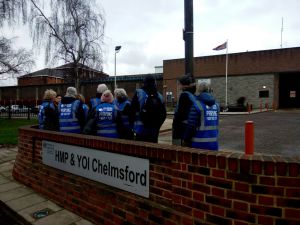 Almost exactly one year later, Chelmsford 24-7 Prayer was in a local church with a ‘Portable Prayer Space’ (another aspect of their ministry) and a man who was using of one of the church rooms during a letting by a non-Christian organisation, approached and spoke. It was the same man and a very positive and much longer conversation about the Christian faith and how he needed Jesus in his life resulted. Seeds sown and reaped.

Could you become a visible presence, prayer walking your village, town or City?

All are welcome to join us –click here for details

Our Partner: Passion for the Nation